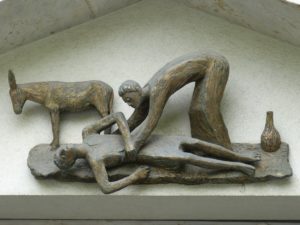 What does it men to “be a man”? Does the definition rely solely on testosterone, and reaching 18 years of age? My friend, Dan Duddy, has said many times, “I know 60 year-old boys, and 16 year-old men,” implying that  those adult males lack maturity and have not meet their responsibilities, while the teenagers do more than meet their age-related responsibilities–and thereby demonstrating how much closer they are to manhood. This scenario reverses the normal process; but in an age when gender can be dissociated from biological sex and radical feminism topples the traditional male/female roles, both boys and men can become confused about manhood or “manliness.”

It wasn’t until my teenage years that I believed assertions such as one made by the Reverend Billy Sunday, who said, ‘you can’t measure manhood with a tapeline around his biceps.’ 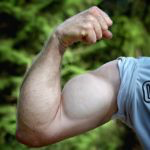 But I eventually learned that those biceps, along with the rest of me, could be used virtuously or scandalously, partly based upon my will and my training. A girl becomes a woman simply by their passage into adulthood. Not so for boys. That’s not to say that that passage into womanhood is easy for a girl, because history shows how difficult life has been, generally, for females around the world. The main difference for boys has historically been the public tests they must pass as, for examples, provider and protector, in order to earn the public and private honor that most greatly desire.

Look at the stark contrast between the two images above. In our culture, “Manly” is often associated with strength and power, two features suggested by the man’s muscular arm. Sometimes we’ll hear the word “muscular” used to make something appear strong and forceful, such as “The ambassador gave a muscular defense of his nation’s foreign policy.” But that muscular arm is static rather than active, and the owner is evidently self-interested. Now look at the arms of the Good Samaritan represented in the first image; they’re not so big. However look at the powerfully good effect of those much smaller muscles on the injured traveler. That’s heroic manhood.

Over the centuries most heroic men have been unsung heroes, because the generosity and selflessness they demonstrated could only be known by a relatively small circle of people and then only celebrated at their funeral. In my lifetime, this group could include three men in particular, each of who sacrificed much while providing, coincidentally, for families of eight children:

The aforementioned were/are devout Catholics, and demonstrated their Christian  charity (aka, “Love”) by sacrificing their wants and desires for the benefit of their families. And as faithful Catholics, they had no shortage of men who modeled heroic manhood and who inspired them to achieve the same: the Community of Saints and, especially, the martyrs. Let’s look at a few of them: 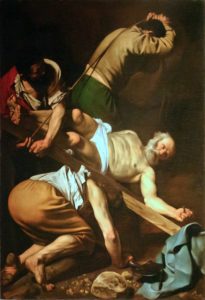 “Cephas” or “Rock,” upon whom the Church would be built (MT 16:18) perhaps because he was the first to publicly affirm Christ’s divinity, saying in response to Jesus, “You are the Christ, the Son of the living God” (MT 16:16)  The first “Pope,” the first Papa shepherd of the infant church.

St Leo the Great describes the courage and faithfulness of Peter, in the context of the swirling cauldron of depraved Rome he was about to enter:

the “tenets of philosophy that must be crushed…the follies of earthly wisdom that must be dispelled…the cult of demons that must be refuted…and the blasphemy of all idolatries that must be rooted out. To this city…you did not fear to come. You entered this forest of roaring beasts, this deep, stormy ocean with greater boldness than when you walked upon the sea.”

By what technique, method or industry would one man overcome these obstacles?

Leo concludes that the overpowering force used by Peter, and every Christian witness since, is LOVE:

“So then it was the force of love that conquered the reasons for fear; and you did not think those to be feared whom you had undertaken to love.”

When we men come face-to-face with a problem, challenge or threat, the last thing that comes to our minds is love. Normally, we’re ready to fight; but if our claim of believing in Jesus is true, then we have to resolve how a fight is Christ-like (“Christian”).

Tradition, built in part on the historian Eusebius’ 4th century writings and those of St Jerome, holds that Peter was crucified upside down. This brings to mind a couple key elements: 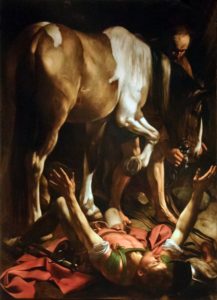 In Acts 15:26, Luke refers to the brave early Christians as those who “have risked their lives for the sake of our Lord Jesus Christ;” and one of the greatest of those great believers, was Paul. This Pharisaic Jew was a notorious tormentor and persecutor of Jesus’ followers, and strove mightily to stamp out the early flames of this nascent movement. So this zealotry makes his conversion or, better yet, transformation, all the more remarkable. The change resulted from his experience  with the Light of the World, and the blinding “illumination” he received from the revelation of Christ. “Hold on,” some may say, “Paul was not one of the “Big 12;” he was not an “Apostle.” Steady…

All Jesus’ followers were disciples (a student of another), and some of them were called to also be apostles (a messenger of another). Paul was converted by God’s intervention, and immediately became a believer in Jesus the Christ and a messenger sent by Him. He was therefore an apostle.

“Meek” is not a word one could use to describe Paul, as he was certainly a lion in his witness to and defense of faith in Jesus Christ. How could he not be, since Christianity would not be what it is without his heroic efforts to evangelize and begin new churches throughout the empire. He endured many extreme hardships in those efforts, including torture, imprisonment and “numerous brushes with death” (2 Cor 11:23-28). Clement of Rome described Paul’s heroism thusly, “…he left this world and reached the holy place, thus becoming the greatest model of perseverance.” How could he be so virtuous and enduring in the face of these many great difficulties? Because of his transformation to a life focused on Christ and living like him: “The life I now live in the flesh I live by faith in the Son of God, who loved me and gave himself for me.” Take note! Christ gave Himself! He was not forced onto that cross, but instead lay down on it. And that is our model–even if one were NOT Christian. Paul knew that the greatest model of manhood is Jesus of Nazareth or, more completely:

I imagine that countless Christians since that time have wished for a conversion such as Paul’s, or the confirmation received by the apostle Thomas; but Jesus knew this, and thereby gave us the hope of his promise in his reply to my patron saint,

“You have believed because you have seen; blessed are those who have not seen, and yet believe.” 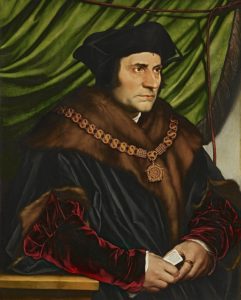 “I die the King’s good servant, and God’s first.”

Thomas More, known by many as “A Man For All Seasons,” from the successful play and movie by Robert Bolt (If you haven’t seen it, please do!).

He gives a stunningly powerful witness to his covenantal commitment to God by his devotion to Christ and to the Church. He was able to give this witness, because throughout his adult life, Thomas emphasized the importance of having a well-formed conscience; and having that virtue should be a natural outcome for any disciple of Jesus Christ, and should apply to every aspect of one’s life. Therefore, a Christian should have no trouble determining the difference between Truth and Falsehood. We do have such trouble, of course, and the subsequent troubles that naturally follow our sin.

His biographers write of his peace during imprisonment, despite the looming execution, “Thus being well and quietly settled in conscience, the security of uprightness of the same so eased and diminished all the griefs and pains of his imprisonment and all his other adversity, that no…lamenting or sorrow appeared in him, but that in his communication with his daughter…and others, he held on his old merry, pleasant talk whosoever occasion served.” Impossible, it seems! It is likely that had it been me languishing on death row and my daughter was visiting me, both my tears and Maureen’s would have flooded the cell!

During his trial, the court gave Thomas multiple opportunities to save his life by supporting both his king’s breakaway church and his new marriage; but Thomas asserted something more important than one’s earthly existence, in his reply to the court: “You say that all good subjects are obliged to reply (with approval); but I say that the faithful subject is more bound to his conscience and his soul than to anything else in the world.”

The actions of the saints above on behalf of the Christian faith (and Thomas’s, also on behalf of the Catholic Church), provided powerful witness for evangelization purposes during their lives and on through to the present. Each persisted in their beliefs and actions in spite of their looming deaths, such that they would not break the covenant between them and God. While their legacy shows them in halos, they were also men; they just happened to be men who sacrificed themselves for what proved to be the good of others.