“Elizabeth was barren, and both were advanced in years“

so Luke the physician/evangelist tells us early in his Gospel.

I wonder what the good doctor thought about Elizabeth’s inability to have children? Or did my use of “inability” unfairly blame her rather than Zechariah?  After all, she isn’t the first “barren” woman described in the Bible (think of Sarah, Abraham’s wife). Perhaps no one bore any responsibility. Did Luke have the not-uncommon thought at that time that this unnatural state might be the punishing result of her sins?

However crude and primitive medicine was at that point in history, Luke’s use of the refined Koine Greek language along with his many references to the Old Testament traditions in the Greek and his authorship of the Book of Acts clearly show the literary skills and mind of a learned man rather than a man of superstition. But his Gospel tells us nothing about the cause of Elizabeth’s barren state. Perhaps he thought Elizabeth’s emptiness was just another unfortunate consequence of the sin of the world (aka, “The Fall”)

Or, perhaps her condition was like that of the blind man cured by Jesus in chapter 9 of the Gospel of John, a suffering not brought about by anyone’s sins, Jesus tells his disciples, but only so that the subsequent miracle would glorify God.  Jesus removed the scale from that man’s eyes, just as he removes the hardness from our hearts. The Gospels do not say those who received miracles had no more problems throughout the remainder of their lives. I’ve no doubt Mary and Elizabeth had many problems throughout their respective son’s lives leading up to their greatest trials, just as all mothers do. But God would follow their greatest agonies with their son’s greatest glories (John’s martyrdom and Jesus’ self-offering). So, Elizabeth’s difficulty could be just another example to reinforce Jesus’s earlier teaching in Matthew’s Gospel, which we could apply to any of his miracles, when in response to his disciples’ concern about the difficulty getting into Heaven, our Lord said, “With man, this is impossible; but with God, all things are possible”

If we look throughout the Bible, we regularly see God’s glory manifesting out of suffering, such as with Job. That is our salvation history, the greatest inerrant thread in His Sacred Scripture! 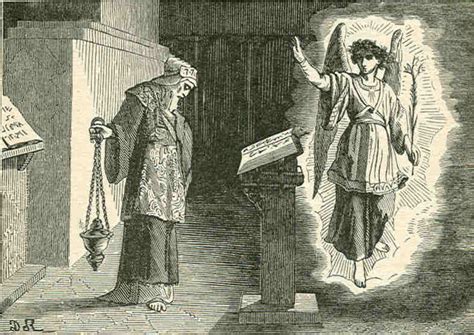 Angel Gabriel Announces to Zechariah that Elizabeth will bear a Son

This painting shows Gabriel gesturing with his message to an overwhelmed and humble man of God. Yahweh, or G_d for observant Jews, sends his messenger when Zechariah is alone in the inner sanctum of the temple. The artist depicts the holy setting by showing the Hebrew Scriptures (Old Testament, to Christians) while holding a thurible to incense the sacred room. This appearance is the first Advent miracle. He’s coming…

Zechariah left the encounter in stunned silence. Wouldn’t we all love to hear a prophecy, a promise, that our sons “will be great in the sight of the Lord…filled with the Holy Spirit…and will prepare a people fit for the Lord.”  Perhaps my father thought that about his four sons. I make that prayer for mine, and for my daughter. Zechariah eventually returned home, and he and Elizabeth conceived John the Baptist. This conception is the second Advent miracle. He’s coming… 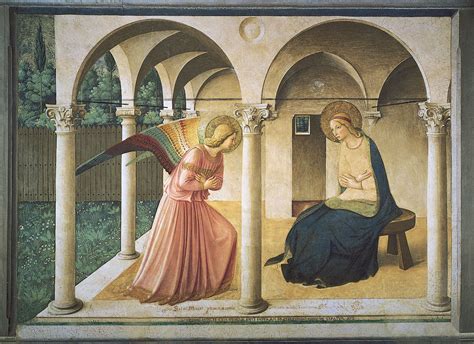 “The Annunciation”, by Fra Angelico

“Hail, favored one, the Lord is with you!” the Angel Gabriel announces to Mary. While Luke tells us that Zechariah and Elizabeth were advanced in years, he doesn’t tell us they were chaste. But Mary’s pointed question to the messenger, “How can this be, since I have no relations with a man?” reveals herself to be chaste.

Once again, art helps to teach us moderns in the same way it taught the illiterate peasants of 15th century Florence, by beautifully illustrating Sacred Scripture in way that touches the heart as it informs the mind. This painting by the Italian friar is one of the most famous in the art world; and, it tells us that, one again, the Holy Spirit has broken into the world of man, gracing Mary and all of us in a way unique to God, “…for nothing will be impossible with God.”  This passages give us the third and fourth miracles: angelic visit and the Immaculate Conception. He’s coming… 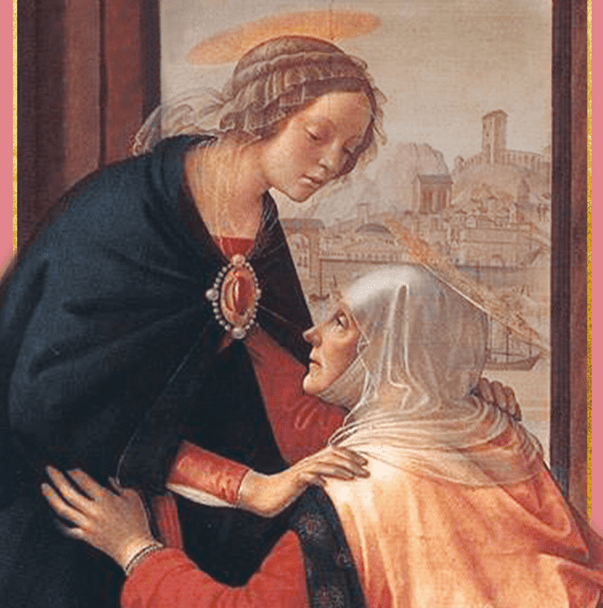 “The Visitation” by Domenico Ghirlandeio

Church tradition tells us that Elizabeth and Zechariah lived in Ein Kerem, a hilly area in the region of Judah. Some references say they lived 5 miles from where Mary and Joseph lived while others say 60. No matter the distance, the love and respect that Mary obviously had for Elizabeth impelled her to make the trek so she could visit her elderly friend. Sacred Scripture doesn’t say what this painting shows; but knowing that the holy Spirit had inspired Elizabeth, one can easily understand how the artist could have imagined the humble and awe-inspiring genuflection by the elder to her young visitor, especially after she cried out, “Most blessed are you among women, and blessed is the fruit of your womb!”

I emphasized “fruit”, because of how the Gospels would describe Jesus eventually doing likewise in an effort to teach how his disciples should demonstrate their faithfulness to God in building His kingdom: “By their fruit you will know them. Do people pick grapes from thorn bushes, or figs from thistles? (Mt 7:16; Lk 6:43-45) Or, “I am the vine; you are the branches. He who abides in me, and I in him, he it is that bears much fruit, for apart from me you can do nothing” (Jn 15:4-5). Elizabeth would go on to honor her young friend, and help continue the message of Gabriel that would ultimately lead to the second most famous prayer in the Christian world: “Hail Mary, full of grace…”

Who is this humble girl from “Nowhere”, Galilee, to be given the greatest honor and blessing of any human?

Humor often relies on contrast, and so does awe. We see the majestic mountain peak or some other awesome force of nature in relation to ourselves, and feel a combination of awe and humility. So we can only make feeble attempts at imagining the same response from Mary who, upon receiving a visit from a messenger of God, trembled in fear. No wonder her humility! My dear friend Fred, a man of faith and of significant stature–much larger than Mary–was driven to his knees in awe and humility from receiving a message from God–and changed his life. He, too, said “Yes” to God. But in contrast to Notre Dame, he–like me and like the rest of us–dropped to his knees because of times when he had said “No” to God. He became a man after God’s own heart. Mary always was a woman–the Woman–after God’s own heart.

In his letter to the young church he founded at Philippi, the first such Christian community in Europe, St Paul emphasized the importance of humility in its service to God through the service of each member to the other. His model for that church community and for us is, of course, Jesus Christ, “…Who, though He was in the form of God did not regard equality with God something to be grasped. Rather, He emptied Himself…” (Ph 2:7). In her humility, Mary emptied herself, and became the vessel for the Savior of the world.

Righteous men are moved to greatness in honor for the women they love. When I think of the kind and tender-loving heart of my daughter, Maureen, I am greatly moved to cherish and protect her–as is Kevin, her older brother (“Maureen” is Gaelic for “Little Mary!”). Artists have penned great hymns, chiseled magnificent sculptures, and brushed the most sublime paintings in their honor and love for our Blessed Mother. Pope Pius V exhorted Christendom to pray the Rosary, for Mary’s intercession in the famous and decisive battle of Lepanto against the invading Muslims. As if to carry on that tradition, the U.S. Naval Academy’s Glee Club gave what I believe to be the most moving rendition of  “Ave Maria” I have ever heard.

How did these men in turn achieve their great feats of artistic and military prowess? Because they humbled themselves to God just as Mary had done in her faithful response to God’s offer via His messenger. Why did they think their efforts might work, or would work? Because they trusted in Mary’s relationship with God, and that our Father would respond to Mary’s humble intercession in the same way that any loving and devoted father would respond to his daughter’s plea for help: with total commitment.

In Mary’s Magnificat, she borrowed from her Jewish ancestors, and sings the Psalm of praise.

The ultimate result of Mary’s acceptance of God’s offer?  Joy, to the world! Gloria in Excelcius Dei! God makes his offer to those at the fringes of society, to move with him to the center. He raises the lowly. He reverses  our misfortunes. He fulfills the promises made in the Old Testament through the prophets. He makes all things new! But first, He needs a trailblazer… 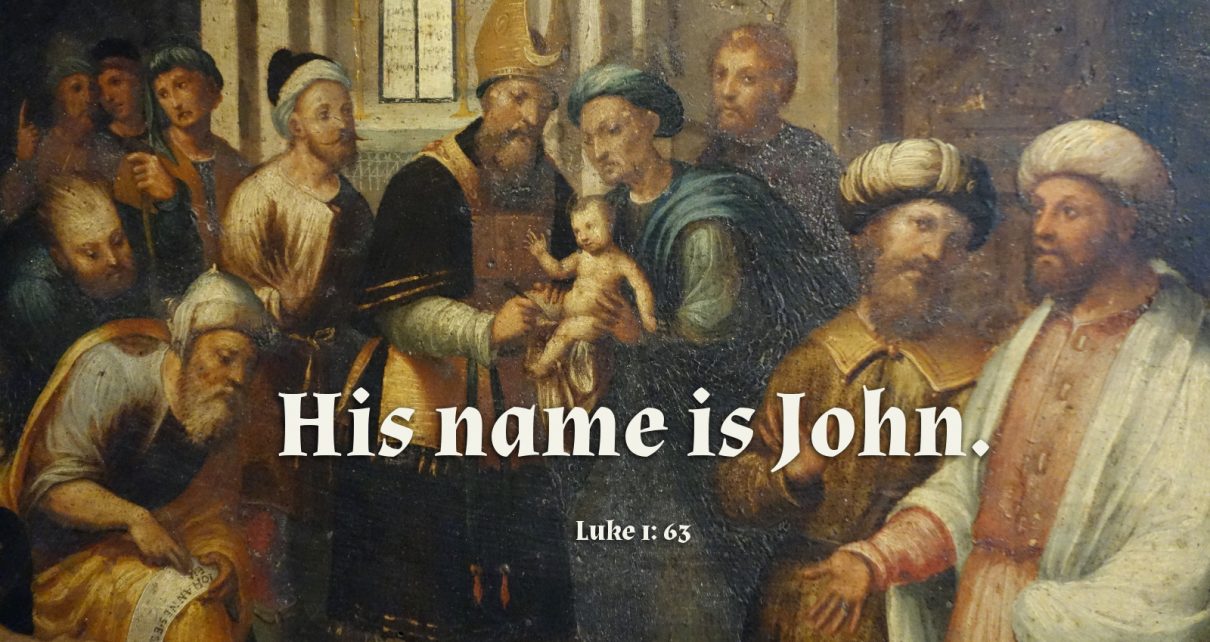 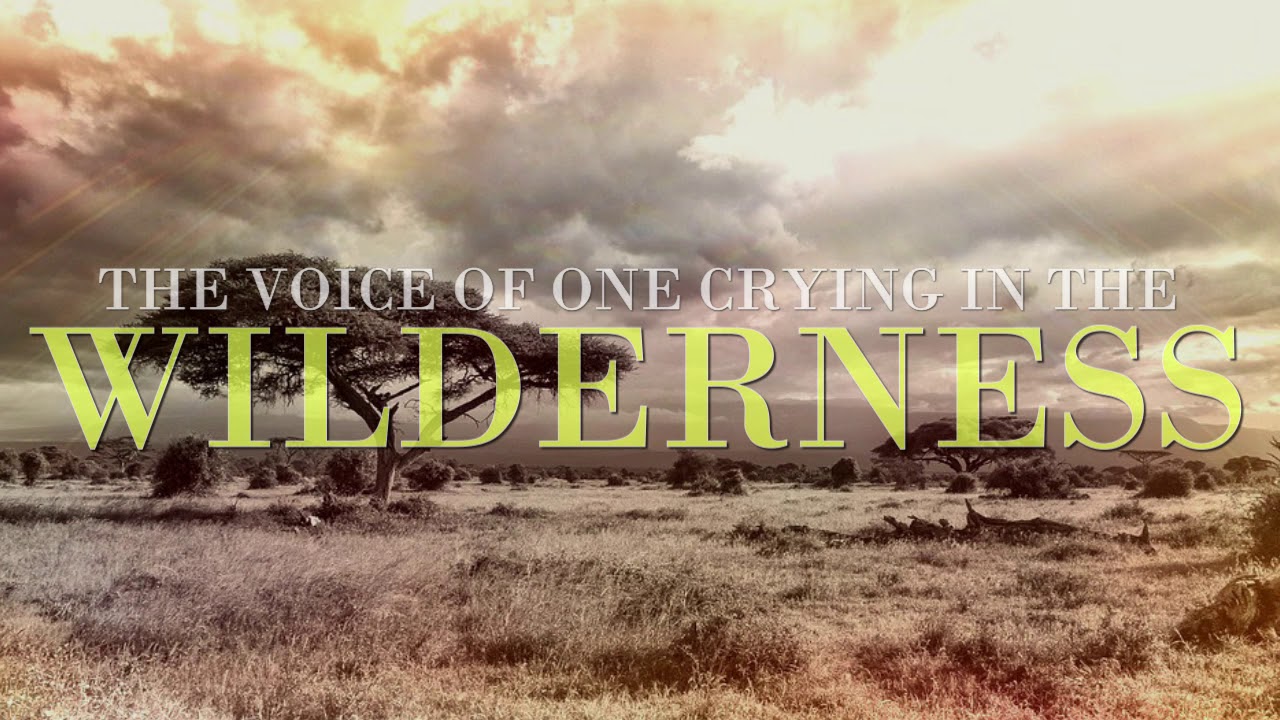 “Prepare the way of the Lord! Make straight His path!” 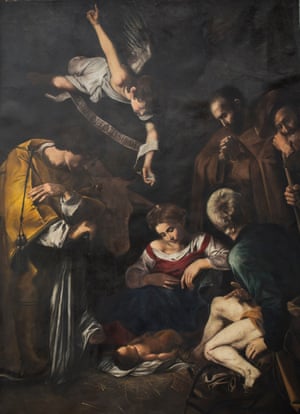 “The Nativity” by Caravaggio

Thanks to John’s trailblazing, the Word spread… 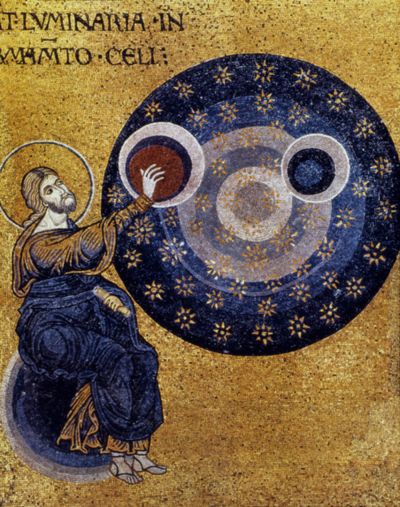 “There will be signs in the sun, the moon, and the stars, and on Earth nations will be in disarray, perplexed by the roar of the sea and the waves. People will die of fright in anticipation of what is coming upon the world, for the powers of the heavens will be shaken.And then they will see the Son of Man coming in a cloud with power and great glory. But when these signs begin to happen, stand erect and raise your heads because your redemption is at hand.”

Thanks to my fellow Sons of the Father, of Discovery House, who participated in our recent Advent Retreat, either in person or in spirit. They help bring me to deeper levels of humility, fellowship, and faith, so that I, too, can say “Yes!” to God: