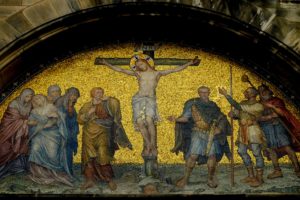 “Truly, this man was the Son of God,” asserted the Roman centurion on Good Friday in Mark’s Gospel (Mk 15:39). In his role as commander of 100 highly trained soldiers that included this capital punishment squadron,  assertiveness would have been automatic for him. He gave his orders, and his men followed them. And that makes sense, since they served a god. Wait, what?? (as my children used to say) 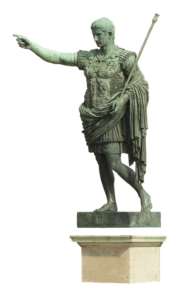 Octavian was the son of Julius Caesar, a man of awesome stature, power and influence over much of the known world. Not long after his father died and he was about to assume leadership of the empire, the Roman ruling class gave him the name “Caesar Augustus,” because it meant “worthy of worship.” He reigned during the time of Jesus, and was considered by his subjects and government leaders as “god,” “savior,” and “divine.” Of additional importance is that since his father was elevated to “divine” status after his death, Augustus had the right to the title, “son of god.” The final evidence to support his great status is that while his father and other rulers had to wait until after they died in order to receive divine status, Augustus became the first Roman emperor to receive that title while still alive. So, what could the centurion commander have meant by his phrase, “Son of God?”

The interpreters of The New Oxford Annotated Bible say that Mark’s centurion does not make a confession of faith, but recognizes Jesus “true identity” (p 1823). In contrast, those interpreting Sacred Scripture in The New Jerome Biblical Commentary say, “The Centurion’s confession echoes the ‘Son of God’ reference in the opening words of the evangelist’s Gospel. The Catholic Study Bible, third edition, notes the centurion’s “declaration of belief that Jesus was the Son of God” (p 1431). And in The Ignatius Catholic Study Bible, the authors refer to the centurion’s expression of “divine sonship” and “to profess faith in in the ‘King of the Jews'” (p 97). Therefore, I ask these authors the same question I asked of the centurion: what exactly do you mean by that wording?

Augustus’ title did not mean he was equal in identity and substance with his father; he was “junior” while Julius was “senior.” So wouldn’t the centurion have had Augustus in mind as his model for this divine sonship,  rather than a sophisticated theology and christology of the true nature of this Nazarene? I tend to think so; but at the same time, I accept the possibility that God the Father gave this man a deep and profound insight into the true nature of God the Son. But we simply cannot have certainty. I have no doubt that the centurion’s statement has great importance, as the torn veil represents the conclusion of the Old Covenant and his assertion begins the New Covenant with the wider Gentile world (the first expression of the paschal mystery). But his “confession” has doubts.

And so that brings us to Thomas the Apostle, and the Resurrection. 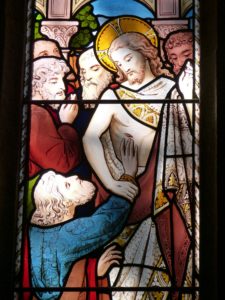 This saint, also known as the Twin, Thomas the Doubter or, more commonly, Doubting Thomas, has had forced upon him a notoriety that has made him one of the most recognized and recognizable figures in the Bible.

John’s usage demonstrates Thomas’ crucial role in his Gospel. Two millennia have passed since the Fourth Evangelist recorded Thomas’ disbelief in the veracity of the assertions by his fellow disciples, that the resurrected Jesus had visited them in the house where they had hidden themselves in fear of the Jews. Despite the passage of time, little seems to have changed in the popular understanding of the Apostle.

Dwight Moody Smith points to the “long tradition of interpreting Thomas” in such a negative light.[1] Had those interpreters modeled their talks after that offered by Pope Gregory, it is likely that any doubt expressed by children named “Thomas” would not result in them having opprobrium attached to their name:

“Dearly beloved…Do you really believe that it was by chance that this chosen disciple was absent, then came and heard, heard and doubted, doubted and touched, touched and believed? It was not by chance but in God’s providence. In a marvelous way God’s mercy arranged that the disbelieving disciple, in touching the wounds of his Master’s body, should heal our wounds of disbelief. The disbelief of Thomas has done more for our faith than the faith of the other disciples.”

Why has history shown such kindness to “Peter the Denier” or “Denying Peter” (my names for our “first pope”), especially with his persistent and blatant repudiation of Jesus occurring at such a crucial time. Perhaps Thomas had some awareness of doubt in and among his peers and himself (Jn 1:44-46, 14:1), and probably had some himself in the beginning.

Think of Nathanael’s initial doubt: “Can anything good come out of Nazareth?” (Jn 1:46); and Jesus’ assertion that their belief in him did not result from witness given by the apostles to each other, but from Jesus having selected them and them having an encounter with him (Jn 15:16).[1] So hearing from that flawed group their reports of having seen the man he knew as Jesus of Nazareth was, understandably, asking a great deal.

Think of how the disciples had disbelieved Mary Magdalene’s announcement, “I have seen the Lord!” (Jn 20:18), shortly after His resurrection. 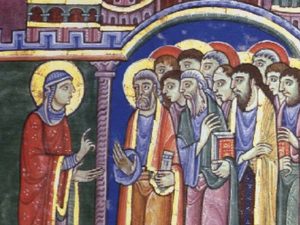 I wonder if we can reasonably conclude that Thomas thought his fellow disciples had seen a spirit of some type, making that the reason he wanted a “concrete” experience with Jesus (Many Catholic writers have used the word “concrete” to describe the hard reality of our faith and its practices).

When John notes that the “other disciple…saw and believed” (Jn 20:8), the expression clearly implies some level of a prior disbelief without stating the object or subject of either the non-belief or the belief. When Jesus attempts to reassure his disciples (Jn 16:1), then says, in apparent exasperation, “Do you now believe?” (Jn 16:31) and, finally, offers his reinforcing peace (Jn 16:33), we can justifiably say that none of this bears witness to the disciples’ marginal belief in Jesus let alone any full-throated faith in his resurrection, despite having shared significant experiences with him by this time.

The “doubt” expressed by Thomas was one shared by his fellow disciples, and by us! The etymology of the word describes “of two minds,” which means, of course, that that person’s mind has not ruled out “belief.” Therefore, Thomas did not reject his faith-brothers assertion, let alone his faith in the Jesus he knew, served and loved. It therefore seems fair and reasonable to defend Thomas’ lack of immediate acceptance of the resurrected Jesus, without condemning him for a purported disbelief or for having never given his heart to Jesus. After all, it was Thomas who insisted to his fellow disciples, “Let us also go to die with him” (11:16), a statement that at least implies love and loyalty because of his Master’s teaching, “greater love hath no man…” (Jn 15:13). 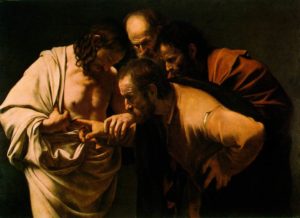 Finally, the main reason we should not fault Thomas lies in the greatness that sprang from his humanity, which resulted in a humble yet profound model of assent to belief in Jesus as his Lord and his God, and a perpetual promise of blessings that await those of us who give a similar assent to Jesus as our Lord and our God!

How about you? Are you of two minds, when it comes to Jesus’ resurrection? If so, then please let me know how you have handled your doubts, and how you can encourage others in theirs. As we uncover more evidence, circumstantial or otherwise, and as we grow in faith from Sacred Scripture, our Apostolic Tradition, witness of morality and our rational minds, we move to the same conclusion as did our loving saint, and cry out, “My Lord and my God!”