“Then God said, ‘Let us make humankind in our image, according to our likeness…” So God created humankind in his image, in the image of God he created them” (Gen 1:26,27) 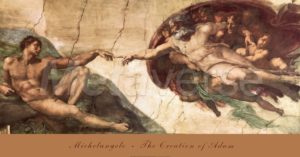 People commonly refer to “God’s plan,” when both good and bad things happen; but what exactly do those words mean?

Does God have a plan for Mankind?

Does God have a plan for each one of us?

Does God plan for bad–or evil–things to happen to us?

If your answer is “yes” then how does that plan reconcile with humanity’s free will, and a good God? 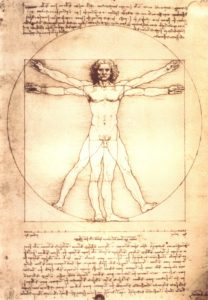 The Catechism of the Catholic Church tells us that God does indeed have a plan for all of His creation, which is to guide it along its journey to a state of perfection. And it is this guidance that the Church names “Divine Providence.” But wait! Didn’t God complete His perfect creation in seven days, and rest on the last day in order to admire His perfect handiwork? Perhaps, but we have no record of that. Instead, Genesis tells us only that God “saw everything that He had made, and indeed it was very good.” (Gen 1:31)

Creation, the Church teaches from its document Dei Filius (“Son of God”, representing The Church of Christ) of the First Vatican Council, was made “in a state of journeying” that would end in its perfection as destined by God. So creation is not static, but is instead dynamic as it continues to unfold in place and time–until the end of time when our place will be with God in his kingdom (“Basilea Tou Theou”, for those interested in the original Greek used in the Gospels of Mark and Luke). But Jesus asserted that “the kingdom of God is at hand,” (Mk 1:15), a phrase that gave light to the theological concept of “the in-breaking of the Kingdom.” So, putting any romantic notions aside, did Heaven begin on Earth?

Sacred Scripture makes clear that the entire timeframe of humanity is one leading to our salvation, and eventually our existence with God. So we therefore have a “salvation history”, one that began with God’s initial revelation of himself to Man and which culminated in the Incarnation of God in the person of Jesus Christ. This salvation plan implies an imperfection, a result of Man’s first rebellion and our continued sin.

The process by which God guides or governs–but does not force–His creation toward this ultimate end, is called “divine providence.” Both the Church and Sacred Scripture assert that this process is not an ephemeral one, but one that is concrete. Mankind has its plans, goals, schemes and dreams, but as the proverb tells us,

“Many are the plans in the mind of a man, but it is the purpose of the Lord that will be established.” (Prov 19:21)

I’ve often heard the phrase, “Man plans and God laughs,” which suggests a few things to me:

What role does mankind play in creation? Are we simply the puppets moved but the Great Puppet Master in the sky, and only according to His plan? If so, then what of Free Will? While Jesus tells us to give ourselves over to the providence of God, in faith, He also tells us to:

“Seek first His kingdom and his righteousness, and all these things shall be yours as well.”

I emphasized “seek” because it points to our free will! Verbs mean action; and we act by choice, not by instinct as does the rest of the animal kingdom. So we must use our free will in order to cooperate with God’s will, in order to fulfill our divine destiny–or the plan that God has for us. What power that gives us! (and what an awesome responsibility, too!).

It would be accurate to say that God wants our cooperation. Perhaps this aspect is no different than the responsibility we have to accept God’s offer of love and return it, or to accept his offer of mercy in response to our sin. God doesn’t need anything; but his overwhelming and awe-inspiring greatness lay in his incomparable love for us, such that he gave us the freedom to reject his offers of love and mercy–because of the free will with which he created us. He did not create robots, pre-programmed to do anything he asks or respond in any way. So our dignity lay not only in the fact that our existence is made in his image and likeness, but in the freedom we have from him–to NOT do his will–and in his desire for us. But it is only by accepting his gift of faith, seeking his kingdom and doing his will along the way that we share in his providence.

Humanity has a role to play in the fulfillment of the Creator’s handiwork. What an honor, and potential for dishonor… 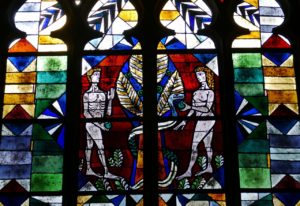 Evil, imperfection and destructive forces exist in our state of journeying, because perfection only happens when we’ve reached God’s kingdom. Our imperfection comes from our free will, as does our potential glory. I say “potential” for two reasons:

So God does not cause evil, any more than he can create something illogical (e.g., the common dinner table question from my brother, Marty, in our early years: “Can God make a square circle?” a question that must reflect, in a certain way, his sixteen years of Catholic education…). However, God permits evil out of respect for our freedom, allowing us to choose good or evil and to use our good responses to evil as a lesson to others that a good can ultimately result from an evil. The greatest good to ever come out of evil is, of course, the Resurrection.

As Jesus urges us, if we orient our lives toward him by believing in him and following him, then we shall be like the poor in spirit, the meek, the hungry and thirsty, the mournful, the pure in heart and the persecuted–who, relying only on God’s plan, have been prepared for the Lord so they end up in Heaven with him. So God’s providence guides us to the point at which we can rest and then say, “It is good” 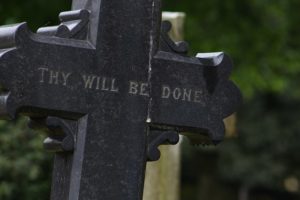 When we say “Thy will be done,” in the Lord’s Prayer, we tell God our Father that we freely assent to doing his will and follow his Commandments–thereby retaining our liberty while living according to his plan: our salvation. So we could add “by me” to that phrase! The very fact of choosing to say that prayer means we have also freely chosen to both believe in and follow the very person who taught us to say it: Jesus Christ.

Prayer, Fasting, Almsgiving (Charity or Caritas–aka Love) and Penance–what I call the “PFAP spiritual fitness program”–help us cooperate with God’s plan, grow in faithfulness and holiness and ultimately realize the salvation promised to us.

Moral existence is both a response to God’s initiative and cooperation with his plan. How? Origen, one of the principal Fathers of the early Church, said we should “unite prayer to good works, and good works to prayer,’ as that is the only way we can fulfill St Paul’s exhortation to “Pray without ceasing”

God’s plan is a loving grace to us, to be his adopted sons and daughters, conformed to his Son and resulting from the Trinitarian love. Since there never was a time when Christ was not, which our Nicene Creed affirms in response to the Arian heresy (THANK YOU, St Athanasius!), salvation history actually began before time since Christ was part of that Trinitarian love, and propels us toward that salvation in God’s kingdom.

God does have a plan, which is to lead humanity to salvation, and to eternal happiness with him.

God cares about each of us. So while his plan does not include the breakfast you had, your thankfulness for whatever meal you chose to eat helps glorify him and lead you to salvation.

God blessed us with free will, and therefore allows us to reject his plan and use strictly our own–to our demise.

God’s complete knowledge of creation (he wrote the plan!), means he has foreknowledge of our actions that we have freely chosen but which he did not predestine.

Let me know how you understand God’s will and plan for your life, and if you credit or blame him for an outcome from an action that either you or others in your life have freely chosen.