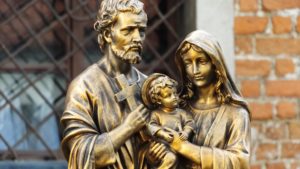 For the past two weekends we had special Christmas celebrations: the Feast of the Holy Family, a day during which we honor the family unit of Jesus Christ, Blessed Mother Mary and Joseph, and Feast of the Epiphany (“revelation from above”). In the Eastern Catholic Church the feast is known as Theophany (“revelation of God”), one that culminates in Jesus’ Baptism.

The Holy Family offers us a role model, above all others, that we should emulate to form our “domestic church,” something Luke seems to imply in Acts (18:8). While the Bible does not specify “domestic church,” our God-given intellect makes it easy to interpret biblical ingredients and come to that conclusion. It’s kind of like saying that while “Trinity” is not mentioned in the Bible, its ingredients are mentioned many times–such as in Matthew, in the passage known as “The Great Commission” (despite the fact that that title is also not in the Bible!). During my theology training this subject would frequently come up during our discussions, and I would illustrate by making a hypothetical case based upon logical deduction. For example, were I to hear objections at saying the Holy Family frequently ate “cake” despite that word not appearing in the New Testament, I would explain that since the text reference indicated they ate meals made of eggs, sugar, flour and water, they ate cake!

In the image shown above, does this family look perfect? Of course–at first glance. After all, bronze has enough malleability to shape and portray each figure into the exact manner desired and imagined by the artist. And I’ve seen many paintings and sculptings of the Holy Family, and none of them suggest the struggles that are part of every human family–including theirs–as each member struggles to find his or her way through life. Of course that is probably true of any family portrait, since it represents only a moment in time and one that is completely orchestrated and planned. I know that neither of my children had halos, and there exists no photos showing either me holding a cross or my wife wearing a modesty scarf to over her head.

A trouble-free family experience? Sacred Scripture tells us that Joseph planned on divorcing the pregnant Mary, albeit quietly, because although they were pledged to each other in betrothal they had not a consummated marriage. Later, both Joseph and Mary lost track of their young child, as Jesus, doing what countless children have done over the ages, went off on his own (to the temple). Had that happened today, Israel’s Child Welfare Services may have made sure that our Lord and Savior would be raised by two foster parents! And certainly no parent could imagine their child predeceasing them, let alone being tortured beforehand.

Immediately below is one of the most memorable sights I experienced during a two week trip to Italy with my children: the Pieta, in St. Peter’s Basilica.  Michelangelo’s masterpiece also portrays artistic perfection, as its beauty and meaning evoke overwhelming sadness and love. 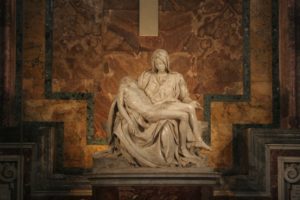 For most of my married family life we had experiences of holiness, and the associated joys from them. But since we are imperfect rational creatures who don’t operate on instinct, we also came to know the sorrows associated with our imperfections; and the greatest consequence of sin’s intrusion was our breakup from a divorce I desperately did not want. So we know what it is like to be both whole and broken. We also know that our response to the consequence of sin should not be more sin, but holiness (easier said than done). For my children and me, the challenge was to transcend the resulting sadness and damage and live as well and as holy as we could. Did we succeed? It’s too soon to tell because we’re still living. But it isn’t too soon to say that we’ve had some successes at living holy. How? By trying to follow St. Paul’s instructions to us via the Colossians: “And whatever you do, in word or deed, do everything in the name of the Lord Jesus, giving thanks to God the Father through him.” 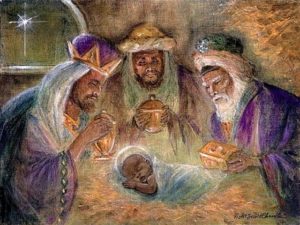 The Feast of the Epiphany remembers how God’s first revelation of himself to the Magi was a revelation to the wider world, since they were the first gentiles to encounter the Christ. In this tradition we find that the “foreigners” accepted on faith and trust the baby as divine and royal, while Herod did not. And so we have the great communication by the Creator to his creation, in which he reveals himself to us as Jesus the Christ and Son of God. This feast is part of an ancient tradition, one that began before the first official celebration of Christmas in the early 4th century.

But what led these Wise Men, these astrologers, to the Nativity? In his book The Star of Bethlehem, Rutgers University astronomer and numismatist Michael Molnar reports on his exploration into this question and his findings, prompted serendipitously after he came upon (a midnight clear…?) an ancient coin that showed a ram looking behind him toward a star. Molnar argues that the image portended a royal event of great magnitude, as that ram, or Aries as the Wise Men would have known, symbolized the kingdom of Judah (land of Judea, and Christ’s region).

These men believed that the event would be a regal or messianic birth, when Jupiter was eclipsed by the moon. Since the Magi were from the East (Persia), Jupiter would have to be in that part of the heavens. Molnar’s calculations put this eclipse on April 17, 6 B.C., simultaneous to when the planet was in the east. Contemporaneous records indicate the day of this event as one “befitting the birth of a ‘divine and immortal’ person.” Whoa…but it gets better.

In the epilogue of his fascinating book, Molnar concludes, “The Star of Bethlehem turned out to be very different from what I expected…We can be assured that the extraordinary conditions of April 17, 6 B.C. were as real and dramatic as any blazing comet or exploding supernova. Unlike those spectacular but terribly foreboding or meaningless apparitions, the portent formed in Aries by Jupiter and other celestial bodies conveyed a joyous, wondrous message about a regal and divine birth in the kingdom of Herod the Great. Now we can look at the star above a crèche at Christmas and know that there was indeed a Star of Bethlehem (emphasis added).”

I find great joy in the use of and results from our reasoning power, to unfold greater understanding of God’s revelation of himself to humanity. So friends, I’d welcome your responses to this post, and how it compares with your understanding of these two wonderful Feast days. God bless us.