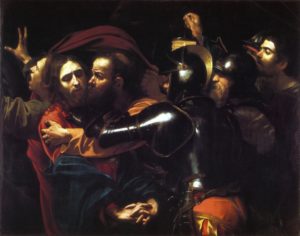 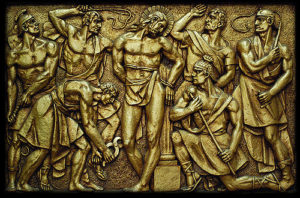 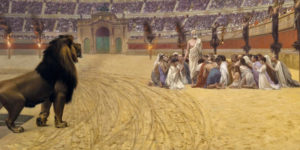 How difficult to explore the history of Christianity, and see the various episodes of persecution of our forebears. Jesus of Nazareth wasn’t, of course, a “Christian;” but he was the first to suffer persecution for the faith that his life–and death–would found. Tradition holds that, of the Apostles, all save John were martyred for their belief in Jesus Christ and their efforts to build his church and grow its faith. During that time, as the ancient historian Tacitus attests, increasing numbers of early believers in “The Way” gave the ultimate witness to their faith.

During Nero’s reign, to say that Christians were a group unfavored by the emperor would be one of the grossest understatements in history. In the year 64 A.D., a fire raged throughout Rome and destroyed most of the city. Many of the citizenry blamed their emperor, believing he had set the blaze in order to entertain himself! Seeking to quell their growing restlessness, Nero had several Christians arrested and tortured in an effort to get them to falsely implicate fellow believers. Tragically, but understandably, this effort proved successful as the entire sect came under suspicion by the Roman populace. Their punishment was to be the source of horrific entertainment for their fellow citizens, including such ghastly “sport” as being mauled by wild animals and set afire as human torches at nighttime. Those awaiting their turn no doubt heard the agonizing screams of their brothers and sisters in faith, and wondered if this faith of theirs was worth the terror? Some of them broke and denied Christ. And while it was bad enough for the Christians to be turned in by their pagan countrymen, it was far worse when fellow believers incriminated them.

So does it help Nick Sandmann, student at Covington Catholic High School, to know that his difficult experience of the vilification of him and his faith (along with his school, classmates, skin color, sex/gender, pro-life belief and MAGA hat) is just the latest in a long line stretching back two millennia throughout his Church’s history–including its Founder? We hope so, because Nick must know that those martyrs (i.e., “witnesses”)–most especially his Savior–who went before him exemplified deep faith and prepared a way for him and his classmates, as Jesus indicates:

But as Nick found out, probably with great dejection and discouragement, when that “world” of hatred includes your fellow Christians–including Catholic leaders and clergy–whose outcry was immediate, public and based upon lies, false accusations and little or no evidence, then the sting goes that much deeper. St Paul is one of those witnesses in our faith’s history, as he experienced vilification, terror and physical harm from his fellow Jews, despite talking as a Jew about a fellow Jew. Notwithstanding all that, Paul continued to exhort his fellow believers,

“Strengthening the disciples, and encouraging them to remain true to the faith. ‘We must go through many hardships to enter the kingdom of God’”              (Acts 14:22)

The outraged comments from some clergy against the CCHS boys seem proof positive that they have chosen to be “of this world,” since some (most or all??) of their anger was directed at the boys because of the MAGA hats worn by them. These men came across more as strident bullies rather than shepherds; and if they assert their shepherd status, then they were clearly unwilling to see the boys as lost sheep at the margins let alone lead them back to the faithful flock as reconciled penitents.

No person is perfect, and that includes the boys of Covington Catholic High School. Those in Nick Sandmann’s periphery who did the “tomahawk chop,” should have received discipline at that moment by the chaperones. I therefore wonder if the boys in Mr Sandmann’s periphery would receive from Pope Francis the solicitude he urges for those in the “peripheries” or “margins” of society. I have doubts, but hope for his care. Still, their participation in the “March for Life” strongly suggests if not confirms their faithfulness–sinful adolescent creatures though they remain. Their youthful indiscretions evidence the fact of teenaged boys’ incompletely formed brains. When we combine that fact with the current hair-trigger hysteria and pseudo moral outrage of our culture, much damage can result–even to the innocents. They therefore need more training from their moral teachers, for a fuller formation in the faith. If that faith goes no deeper, then they will not have the ability to withstand Satan’s forces because, as Jesus tells us in his parable of the Sower of the seed (the “Word”),

“And these are the ones sown on rocky ground who, when they hear the word, receive it at once with joy. But they have no roots; they last only for a time. Then when tribulation or persecution comes because of the word, they quickly fall away.”

Let us pray that our moral leaders remember their sacramental graces, and to wait for the truth before passing judgment and then washing their hands.

Did your initial reaction to the first video change after seeing the longer version? What bogeymen of our culture did you see in that video? Do you think our positions are so entrenched that we have gotten  to the point where we are unable to have a rational discussion about events such as this? Finally, I wonder how many of us missed the MUCH MORE IMPORTANT story of the day: the March for Life.

I look forward to your thoughtful comments, and coming away from them with a better understanding and a deeper faith.