After weeks of the tumultuous meetings of the Constitutional Convention, Benjamin Franklin reportedly said of the chair being used by George Washington, “I have often looked at that, without being able to tell whether it was rising or setting; but now I know that it is a rising sun.”

The image of this church could prompt a question of a similar nature, about faith in the West, in which we would ask if Christianity in general and Catholicism in particular are in decline. The right response would say “yes” and “no.”

Surveys conducted in the United States, Canada and, especially, Western Europe all point to a significant decline in faith and religious affiliation and practices, manifested by decreased belief in God and in church membership. However, when horror and tragedy strike, such as the terrorist attacks in the U.S., Great Britain and France, the churches became crowded. Even the U.S. Congress got into the act! 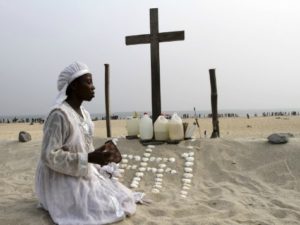 Contrasting with this profile, is the ascendency of Christianity in both Asia (particularly China) and Africa. Since the post-modernist philosophy grew out of the Enlightenment, and the latter grew out of Europe, it is no surprise that Europeans increasingly expressing the false narrative of faith being incompatible with reason, unless that faith is only in science and technology. More to come on this important topic!