Make Way for the Lord!

In ancient Israel, prophets mediated God’s revelation, message and word to his people. These revelatory communications could come into the prophet’s consciousness, one transformed by God, via visions, dreams or other forms of sublime awareness. Once the prophet understood the revelations, God had him (and, rarely, her) use his human abilities to transmit these understandings to his community. Some prophets resisted God initially, as they were overwhelmed by the task at hand and the future prospects of committing to it (“Uh, thanks Lord; but I can think of a thousand other things I’d rather do than inform members of any community, let alone mine, that they are sinners and had better change their ways–or else.”) 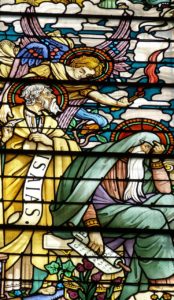 In Isaiah’s case, once he became possessed by the spirit of God’s glory , via his word, the drafted prophet was able to see the great chasm between that glory and human sinfulness–and couldn’t do it:“In the year that King Uzziah died, I saw the Lord, high and exalted, seated on a throne; and the train of his robe filled the temple. Above him were seraphim…with two wings they covered their faces…and they were calling to one another: ‘Holy, holy, holy is the LORD Almighty; the whole earth is full of his glory.’  At the sound of their voices the doorposts and thresholds shook and the temple was filled with smoke. ‘Woe to me!’ I cried. ‘I am ruined! For I am a man of unclean lips, and I live among a people of unclean lips, and my eyes have seen the King, the LORD Almighty.’ Then one of the seraphim flew to me with a live coal in his hand, which he had taken with tongs from the altar. With it he touched my mouth and said, ‘See, this has touched your lips; your guilt is taken away and your sin atoned for.’

The “red-letter” text above is used to emphasize the ultimate cost one would pay, if one saw God. In Exodus, Moses asks God to show him his glory; but God says he can only reveal “My goodness” and “My name,” adding, “You cannot see My face, for no one can see Me and live.” But our prophet was reassured: “Then I heard the voice of the Lord saying, ‘Whom shall I send? And who will go for us?’ And I said, ‘Here am I. Send me!’” And so he did. Does this message from Isaiah ring familiar?

“In the wilderness prepare
the way for the Lord!
Make straight in the desert
a highway for our God”

Of all the prophets, John the Baptist is the greatest. How do we know? Because he received the greatest 3rd party endorsement in history–from the Son of God:

“But what did you go out to see? A prophet? Yes, I tell you, and one who is more than a prophet. This is the one about whom it is written: ‘Behold, I send My messenger ahead of You, who will prepare Your way before You.Truly I say to you, among those born of women there has not arisen anyone greater than John the Baptist! Yet the one who is least in the kingdom of heaven is greater than he. 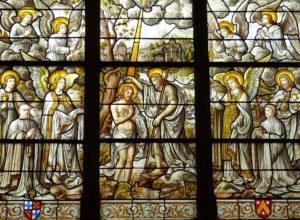 What is Jesus of Nazareth doing? Why is he there?  For the same reason he is here: “Emmanuel;” because he is “God with us.” The Christ came as the ultimate manifestation of God’s love. His great humility is demonstrated by this desire to experience the ritual of repentance and the conversion it brings–despite being free of sin. The Apostle John wrote:

“In this the love of God was made manifest among us, that God sent his one Son into the world, so that we might live through him.”

This great act of charity prompted the Father to declare,

“This is My beloved Son, with Whom I am well pleased.”

But as history makes clear, there would eventually be the greatest act resulting from the greatest of those theological virtues: the Crucifixion! And the foreknowledge of this act no doubt contributed to the Father’s great pleasure in his Son.

We, too, must share in this pleasure! Through our conversion from sin, belief in the Son and modeling him, we become the adopted children of God–and become like God!

St John, in his first letter:

“See what love the Father has given us, that we should be called children of God; and so we are. The reason why the world does not know us is that it did not know him. Beloved, we are God’s children now; it does not yet appear what we shall be, but we know that when he appears we shall be like him.”

St Athanasius, in his treatise On the Incarnation from the early 4th century:

“He, indeed, assumed humanity that we might become God. He manifested Himself by means of a body in order that we might perceive the Mind of the unseen Father. He endured shame from men that we might inherit immortality.” The great saint was not suggesting we become the same essence, nature and substance of God, nor equal to the Divine; rather, as adopted children of God we share in the graces from him and then extend them to others.

St Peter, in his second letter:

“His divine power has granted to us all things that pertain to life and godliness…by which he has granted to us his precious and very great promises, that through these you may escape from the corruption that is in the world because of passion, and become partakers of the divine nature.”

St Paul, reinforces our being made in the image and likeness of God:

“Now the Lord is the Spirit, and where the Spirit of the Lord is, there is freedom. And we all, with unveiled face, beholding the glory of the Lord, are being changed into his likeness from one degree of glory to another.”

Can you imagine your baptism in a different light, now that you know the greatness behind the sacrament? Will your worship of Jesus’ Baptismal Mass change, as a result of this new knowledge? I hope so, and welcome your comments to that end.