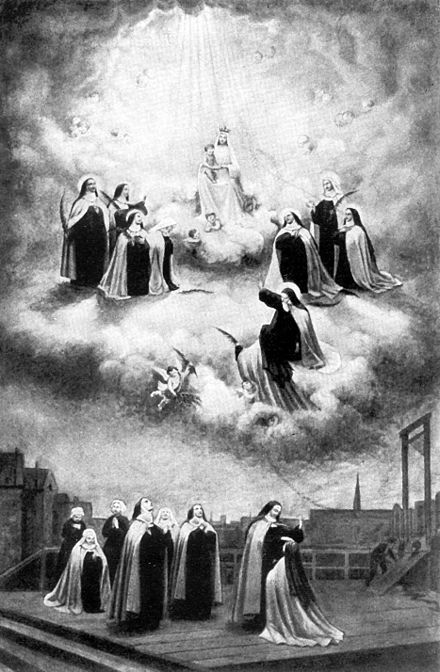 The Nuns of Compiegne

In the year 1789 a violent mob of outraged Parisians stormed and captured the royal prison known as the Bastille, and thus began the French Revolution. The Revolution’s goals? Overthrow the government of monarchy and its corrupt church, and replace it with a system based upon the ideals of Liberty, Equality and Fraternity–but obviously only on their terms. The sudden removal from power of the king, nobles and clergy caused a power vacuum, and chaos ensued for a few years. In an effort to restore order, the radicals installed Maximilien Robespierre as head of the woefully misnamed “Committee on Safety,” whose notorious actions would soon usher in the “Reign of Terror.” Shockingly, Robespierre understood all this as a sign of virtue! This “Reign” occurred, ironically, during a period known as the “Enlightenment”. From 1793 to 1794, massive slaughter defined the Terror, with reports of a death toll in the tens of thousand that filled millions with fear and grief. One can certainly understand those emotions when, after all, those who died had fathers, mothers, sons, daughters, friends, etc, etc. You get it…

The violent mob manifested great immorality and ignorance during this period. The massive scale of the desecration, death and destruction begs the question: How could so-called “enlightened” people commit such evil, in a Catholic nation no less, one known as the “eldest daughter of the Church” with records of Christianity dating to the year 177? It boggles the mind…

Many of those deaths were clergy and religious, as they were among the main targets of the violence, because of corruption within the French Church. Too many of them chose a path other than the one taught in the Gospels, and therefore departed from The Way (the original name for Christianity). They spent too much time with the aristocracy, nobility and the royalty, and too little time with the hungry, thirsty, naked, homeless, sick and imprisoned (Jesus and the Gospel evangelists made that latter group famous, and inspired the Church to develop the “Corporal Works of Mercy“.) Pope Francis talks frequently about going out to the “peripheries”, to “meet the people where they are.” (but like any good lifeguard, we don’t stay out in those peripheries–especially if that is an area of sin–but we lovingly work to bring the outcasts into the fold of the Christian community.)

The revolutionaries sought to de-Christianize France through their religious persecution, and they succeeded. Thousands of Christians were killed by the guillotine, as well as by starvation, drownings, and sheer brutality. It doesn’t take much imagination to think of the horrific images of such violence, with piles of heads separated from their decapitated bodies scattered throughout the streets of Paris. I shudder to think of people–especially children–finding the heads of their loved ones in these piles. Christian Europe has a bloody history, as it has slaughtered many of its own throughout the centuries. They, too, discarded the Gospels. If the revolutionary marauders knew any of this past, perhaps they used that knowledge to rationalize their actions against religion.

The new regime outlawed religious life and any aspect of it. Be gone, superstitious religion! We have replaced you and your mysteries with the certainty of science based upon reason! But these changes ultimately brought materialism and thus you have the resulting blasphemy of converting the Cathedral de Notre Dame de Paris into the Temple of Reason and its cultish ceremonies.

Among the persecuted Catholics was a small group of Carmelite nuns, aka “Daughters of the Blessed Virgin Mary”.  The Carmelites take vows of withdrawal from the world in devotional prayer for the sake of the world. As with all avowed Carmelites, this group in Compiegne never expected to see the outside world again. But their vow was their crime, and it put them in the cross hairs of the revolutionary government. Their religious commitment made them enemies of the state.

The nuns were ordered to swear a civic oath, and to renounce their faith and religious life—which they refused. Over a two-year period the state closed all monasteries and convents, forbade religious clothing and forced the evicted religious into the streets or–for the lucky ones of Compeigne–temporarily into the homes of loved ones. But they had to live in hiding for more than a year, and did so as a small community of other believers—in their commitment to Christ and to each other!

It should come as no surprise that during this tumultuous time, the sisters struggled in various ways to this new reality, responding with anxiety, fear and depression. They simply wanted to live a life of humble prayer, but events soon forced them to face the dreaded reality that that life was soon not to be.

Over time and through deep prayer, the record of several nuns show how the group passed through various stages of mystical transformation of ever-deepening faith, to arrive at a peace that St Paul describes as “beyond all understanding, guarding your hearts and minds in Christ Jesus.” (Phil 4:7) I, too, have prayed for the mystical transformation and its resulting peace, changes that seem to occur mostly in the midst of suffering. Our faith has countless examples of the transformative power of trust in God while we face the forces of evil. 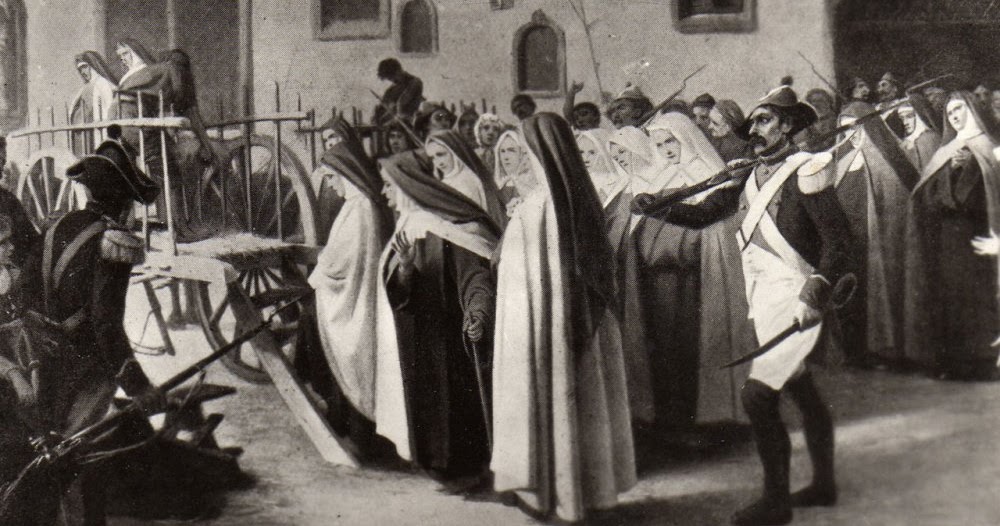 Eventually, the inevitable happened, and the state arrested, tried and convicted the nuns–and then sentenced them to death by guillotine. On the night of July 17, 1794, a horse drawn cart transported the nuns to the scaffold, and the crowd hurled insults, saliva and objects. Jesus had his way of the cross, while these women had their way of the scaffold. Both means of torture and death were constructed of wood and iron!

Along the way they spontaneously began singing the hymns of their faith, such as “Veni Creator Spiritus“. Gradually they gained some sympathy, and increasing numbers of brave onlookers joined them in their hymns.  As they arrived at the scaffold each exited the cart, and formed a line. The Mother prioress faced them, while holding a statue of the Blessed Mother that each sister would reverently kiss before climbing the stairs. The last to exit the cart was Sister Charlotte who, at 78, was the oldest sister. She was a partial invalid, but that didn’t stop the guard from grabbing her from the cart and throwing her to the path. I’ve known many 78 year-olds, and wonder how depraved a man has to be in order to act with such malevolence and how course a crowd must have grown to abide–let alone applaud–this action.

She arose with the help of onlookers, her face smeared with blood, and thanked the guard for not killing her so she could have the blessing of the same death as her sisters!

The first in line was Sister Constance, the youngest member and one who had not yet taken her final vows. In an amazing demonstration of self-control, knowing that her death was imminent, she began the group’s final hymn, “Laudate Dominum” or “Praise the Lord” (Psalm 117 the shortest Psalm and shortest chapter in the Bible). This hymn was composed by Wolfgang Amadeus Mozart, who died during the early stages of the revolution). Just before her hymn was cut short, she forgave her executioner, as did each of the sisters who followed her. However, until the blade subsequently reached each of their necks, the sisters carried on singing until the only remaining voices were onlookers, who could say, “it is finished.”

The murders of such sweet souls caused an outcry, and 10 days later Robespierre himself was executed.

Although Catholicism has yet to regain a strong presence in France, if it ever will, the faithful devotion of these religious sisters carries on today in those who, despite facing evil, claim Christ as their savior.

Please mark your calendars on every July 17, to celebrate the feast day of these heroic women.

We’ve all experienced suffering to some degree. For those of us who suffer right now, how do we trust that we will persevere? Can we have that transformative experience of those devoted nuns of Compiegne? I believe we can, by relying on the community of faithful brothers and sisters in Christ, through spiritual direction, deep prayer, reading and the trust we have in God’s faithfulness to us. But, how can I manifest that trust? What happens if we suffer profound loss, and the comforts of an untrammeled life disappear because our life has in fact become trammeled? My spiritual director advised me that I was thinking about this from an incomplete perspective. Just as faith, mercy, forgiveness and love are gifts that come from God, so too does trust come from Him. So, we should ask God for the gift of trust, and then accept it from Him so that our trust in Him grows. That taught me a perspective I never knew, and one that has sustained me more times than I can count. I didn’t know how I could generate the trust I needed, in order to make my way through and beyond the great difficulties I have faced and will again face. But my emphasis was on the wrong person in that relationship. Instead, I learned to look at Them–the three Persons whose trust I could always have.