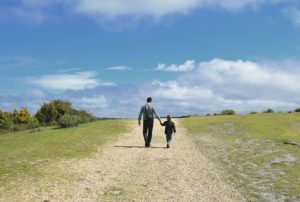 In the first year of his pontificate Pope Francis released his Apostolic Exhortation “Evangelii Gaudium” (“Joy of the Gospel”), urging bishops, priests and all the faithful to renew the New Evangelization and bring the Gospel to those at the margins of society. One way of achieving that, Francis reminds us, is to meet those individuals were they are and then accompany them in the same manner as Jesus accompanied the two disciples on the road to the town of Emmaus.

All too often people express this theme of “accompaniment” in such a way that would lead one to believe that Jesus travels with us as we continue our sinful ways, loving us and showing mercy–without condemning the sin or showing us a better way. After all, they say, Jesus regularly dined with the sinners. And they would be correct, because every human sins. But they need to go just a bit further in their description of the Nazarene, to tell, as legendary radio raconteur Paul Harvey so often said, “the rest of the story.” Jesus did not sin with them, or accompany them further into their sin! You cannot read the entire passage by Luke and come away with that understanding. Jesus is the good physician who came to heal the sick–sometimes with tough medicine. He’s the good parent who loves his children enough to say “No.” And as the good teacher, he explains why and how we should live as he does.

Earlier on that unforgettable day several of the Apostles found the tomb of Jesus empty, and one of them, Mary Magdalene (“Apostle to the Apostles”) was the first to see Jesus after His resurrection (because He revealed Himself to her first). Some day, indeed! And that is why the two travelers were downcast as they walked, and then incredulous upon hearing the stranger ask them what they were discussing.

Just imagine you and a friend were walking along Kunia Road outside Pearl Harbor on December 9, 1941 or along Liberty Street in lower Manhattan on September 13, 2001, and some stranger came up to you and asked that question. I’ve never visited Hawaii and don’t know any Hawaiians, but their “hang loose” reputation makes me think they would temper their expression of astonishment. On the other hand I’ve made many business trips from my native New Jersey to Manhattan, and therefore have no doubt that the “temper” of the reply would be hot–and colorful!

A careful reading of Luke’s beautiful description of this journey makes it clear that Jesus had no intentions of accompanying those men in their ignorance. That is immediately evident as his correction begins as a chastisement, largely for their lack of faith and understanding. He therefore doesn’t appear to render tenderhearted mercy as he illuminates their thinking.

Firstly, he needed them to understand how wrong was their hope for a political, military or royal messiah to be Israel’s redeemer from Roman authority. Instead, the messiah they needed would also be needed by the world–to redeem them from sin and death.

Secondly, they, as observant Jews, needed to know how Jesus’ suffering and death would lead to his glory and resurrection, as prophesied in the Jewish Scriptures–their Scriptures. After accepting their invitation to dine with them and arriving at their place, Jesus assumed a leadership position by taking, blessing, breaking and giving the bread to his new friends–those who would soon become his fervent disciples. 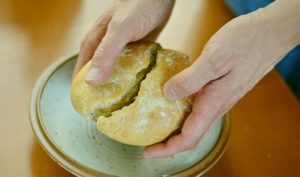 Was Jesus frustrated at them for not believing Sacred Scripture? Probably. But that’s no big deal, because he proceeded to teach them and give to them. He was–and is–the King who came to humbly serve.

Eventually, those men saw and believed–with his help.  Perhaps they were a warmup for Jesus as his imminent and fateful meeting with Thomas would show. “You believe because you have seen. Blessed are those who have not seen, yet believe.”  We are those men–and women, since Mary Magdalene did not believe until Jesus called her name.

Ask, and it shall be given; seek; and you shall find; knock, and the door shall be opened. Dear Lord, please help us in our belief. We ask, seek and knock, so help us to hear you call our name.